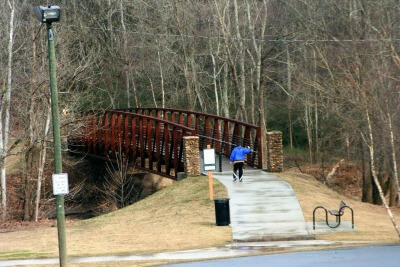 Thanks to the action of the Woodstock City Council, residents of Woodstock and surrounding areas will soon have access to more walking trails. A resolution was recently passed approving the grant for the Rubes Creek Trail. The trail will run along Rubes Creek, from Arnold Mill Road to near Springfield Park.

The next step in the process will be acceptance by the Georgia Department of Transportation (GDOT) which can take several months, once that is done the city will put the project out for bid. The project is estimated to cost $675,000 with a contribution by the city of Woodstock of 20% of the total cost, or $135,000.

The council also approved, 6-0, the expenditure of Parks and Recreation impact fees, for the addition of bridge and trail extension for the Downtown Spur Trail. When the Downtown Spur Trail was originally designed, the connection to the trailhead at Woofstock Dog Park was not contemplated. As plans for the park and the trailhead began to form, the plans for the trail were modified to include the new connection, including a pedestrian bridge.

It was determined in a study after the initial design that the section of the trail connecting the Woofstock Park trailhead and the bridge would need to be an elevated boardwalk instead of by the concrete trail as originally designed. Those changes have resulted in the project costing approximately $300,000 more than the current allotment for trail construction.”

It was noted by City Manager Jeff Moon that if the city did not approve to allocate the funds that the bridge would not be built and “we’ll have a trail head that won’t be connected to the trails.”

The 1.3 mile-long trail is expected to be completed by April.

All of these are part of the Greenprints Project Master Plan whose goal is to use the miles of riparian and natural corridors in the area to lay out a 60+ mile network of multi-use trails connecting present and future greenspaces and providing a different mode of travel within Woodstock.