Years ago, there was a restaurant in Marietta called the 1848 House. It was one of the last remnants of antebellum architecture in the area. When it was built, it was used as a country home – a long trek by carriage from the city, where the owners could get away from the hustle and bustle of Atlanta.

A century and a half later, the metro area has expanded to engulf it. Scarlett O’Hara’s fictional plantation, Tara, was actually supposed to be located just a few miles south of where the Atlanta airport is today. They would travel miles and miles from the city to get there. Once again, that entire area has been swallowed by development and expansion.
When we first moved to Woodstock in 1999, it was the quintessential quaint town, far from the city. When I told my co-workers that every evening I sat on my back deck, looking at the woods and listening to the creek, they thought I was living in a tent in the wilderness. That’s one of the things that makes this town a great place to live. It’s close enough to commute to the metro area, but still far enough away to make you feel like you are not part of greater Metro Atlanta. 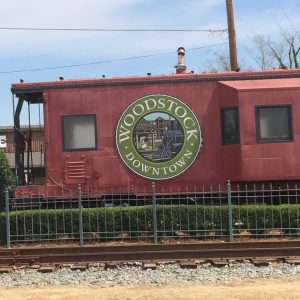 I know that eventually growth and expansion will engulf our town. It’s inevitable. We can see the signs all around us. If a former Woodstock resident, returning after 20 years, were to drive around the downtown area of our little town, they would be lost. It’s barely recognizable. And yet there are still things we want, another restaurant here, another supermarket there. In the midst of all this growth, I like to remind myself why this is a great place to live, and I find that my reasons haven’t changed over the years.

Woodstock is still the friendly place we fell in love with years ago. We like running into people we know when we go out. We like having an active downtown area, with summer festivals and events. Camping, fishing and hiking are only minutes away. Plus, Woodstock embraces its history, instead of paving over it.

I know people who buy second homes in North Georgia, a place to get away on the weekends. I tell them I don’t have to. Woodstock is already a place to live – and get away from it all.

By Matt Neal, contributing writer who has lived in Woodstock with his wife since 1999.