There’s no doubt that Woodstock football fans are enjoying the sounds of the bands, the awe-striking patterns of body paint worn by excited students, and the smells of a great pre-game tailgate.  On Friday nights, we witness the fruits of the labor of student-athletes who have poured their all into intensive and, in some cases, excruciating summer workouts.   These are common variables to any football experience, but what the fan can’t see at a glance is the history behind each program represented on the field on a given Friday night.  A good example of vastly different histories is River Ridge and Sequoyah high schools. 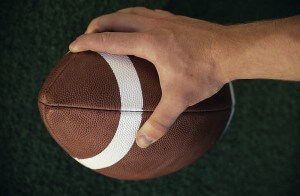 The Sequoyah Chiefs have built a winning program since the school’s inception in 1990.  In the early 2000s, the Chiefs posted five consecutive winning seasons, including five playoff appearances under the tutelage of the long-tenured Sid Maxwell, who coached the program for 15 years.  Maxwell posted a 97-67 winning record.  A changing of the guard took place in 2009 when James Teter took the job and led the team to  a fair start, posting a 6-4 record and narrowly missing the playoffs. The program took a dive in 2010 and 2011 with a combined record of seven wins and 12 losses, marking three straight years without a playoff appearance. A stronger record in 2012 and 2013 of seven-plus wins each season has renewed faith in this program. A program like Sequoyah football is steeped in lore and tradition, giving the fans and community an expectation of a certain level success within the program.

On the opposite end of the spectrum, 2009 was the kickoff of the River Ridge Knights football program, led by Head Coach Robert Braucht.  After a few seasons with only a junior varsity team, the program became eligible for a full-fledged varsity squad.  The team made its lone playoff appearance in 2012, with a hard-fought loss against Grady.  The future is bright for this young program led by an impassioned coach with a good crop of young players and a large talent pool.  The school has grown at an enormous rate since its inception, jumping from an enrollment of 1,096 in 2012 to 1,543 in 2014 and has nowhere to go but up as the school enters its sixth year in Cherokee County.

Both teams share some similarities such as running traditional Wing-T sets and offenses. Sequoyah and River Ridge are teams that like to establish the run game early and often.  As the season grinds on, expect both of the programs’ stars to lead their teams to hopefully many victories.  Third-year signal-caller Marcus Spears runs the show for the Knights.  There are many standouts on both sides of the ball as well; running backs Tanner Hicks and Michael Lewis spearhead a staunch rushing attack.  While senior defensive ends Cameron Johnson and Jacob Samuels hold down the fort on the other side of the ball.  As for Sequoyah, junior Austin Tracy will take over the reins at quarterback as 3-year starter Lex Lauletta departs. There are standouts all over the field for the Chiefs as 6’2” 170-pound Derrion Rakestraw lines up at receiver and at corner.  Seniors Blake Miller and Branden Johnson hope for stellar seasons at fullback and defensive tackle respectfully.  The challenge for River Ridge is becoming a power in an area already saturated with great programs and long-standing tradition. Fans and supporters of this River Ridge program must  stand with the program even in the 0lean years to establish a brand and tradition to become a strong hallmark in this community.

The Chiefs can grow on the success of an already successful program. The problem  the Chiefs might face is that with the programs created in the last decade (Creekview, River Ridge) and even the opening of Woodstock High School in 1996, the net to cast from talent wise is not as large as it used to be. These are challenges faced by programs situated in growing suburbs such as Canton and Woodstock, but a school with a large alumni base and strong community like Sequoyah should not be too adversely affected by these circumstances. Sequoyah will be a hallmark of tradition in Cherokee County football for years to come.  Coach Teter has the boys in the right direction this year, and should expect another great season.

While these teams are working toward the same goal with vastly different levels of experience, they are sure to build great young men to lead in our community.  River Ridge and Sequoyah are two programs in Cherokee County who both have great times to come, this year and in the future.

Caleb Ductant is a senior at River Ridge High School. In addition to this post, watch for more of Caleb’s posts as a part of his senior project.