Last month, Woodstock Mayor Donnie Henriques presented his State of the City address to a few audiences. Here are some of the highlights, including facts from the past year and expectations for 2020.

• Council members Tracy Collins, David Potts and Rob Usher were re-elected for additional four-year terms.
• Robert Tidwell was appointed as Municipal Court judge. Michael Huffstetler joined the city as parks and recreation director.
• Calvin Moss was named Police Chief of the Year in Georgia.
• Jake Hill was named Building Inspector of the Year in Georgia.
• The Woodstock Visitors Center at Historic Dean’s Store was named Visitor Center of the Year in Georgia.
• Council Member Colin Ake and budget analyst Crystal Welch were recognized among the Top 10 in 10 by the Cherokee Chamber of Commerce.
• The mobile visitors center was awarded the Jeffery Tatum Visionary Award by the Georgia Department of Economic Development Tourism Division.
• Officer Shane Bonebrake deployed a pink patrol car for Breast Cancer Awareness Month, gaining more than 1,600 signatures in tribute to survivors, as well as national media attention.

• Woodstock was recertified as a Green Community at the Gold Level by the Atlanta Regional Commission.
• 850,000 pounds of recyclables were collected during the Mayor’s Recycling Challenge, with the highest increase, 67%, in 2019.
• An urban orchard was installed at Dupree Park.
• More than $450,000 in impact fees were collected through new residential permits for the expansion of parks and recreation facilities.

• 322 residential permits were issued.
• Commercial construction valued at $27 million added 465,000 square feet of commercial space.
• 438 new business licenses were issued.
• 22 ribbon cuttings were celebrated at new businesses through IN WDSTK.
• Hotel demand was up 3.5%, generating revenue of more than $10 million.

• 804 stormwater structures were inspected and cleaned.
• 34 downtown parking places and 10 PTV spaces were added.
• A half-mile of new sidewalks was created, and 2 actuated crosswalks were installed.
• 3 miles of streets were resurfaced.
• 107 street lights were added, while 24 were convertedto LED.
• 5 turn lanes were installed, improving traffic flow throughout the city.

• A master plan will be developed from a Smart Corridor study, which Henriques encourages citizens to participate in. Visit wdstk.ga/smart for details.

• More than 50,000 people attended 28 events at the Northside Hospital-Cherokee Amphitheater.
• $25,000 in private investment was made by the 107 active investors in IN WDSTK.
• IN WDSTK events — Scarecrow Invasion, Jingle Mingle, and Taste of WDSTK — raised $27,000.

• Project Lifesaver devices were implemented to locate persons at risk reported missing, parks software was deployed to ensure timely inspections and upkeep, and the rapid ID technology was acquired by Woodstock Police Department to identify fugitives in the field.
• Woodstock police responded to 31,946 calls with a 2:10 minute response time on priority calls. Crime was down 11% from 2018.
• Woodstock Fire and Rescue responded to 5,901 calls with a 4:08 response time on priority calls.

The entire State of the City address is available at http://wdstk.ga/2020sotc. 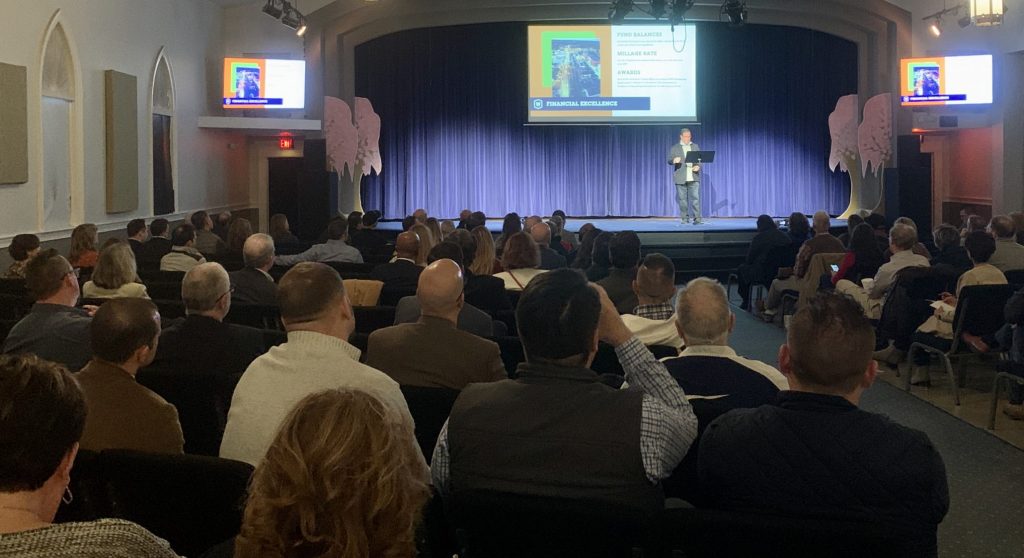