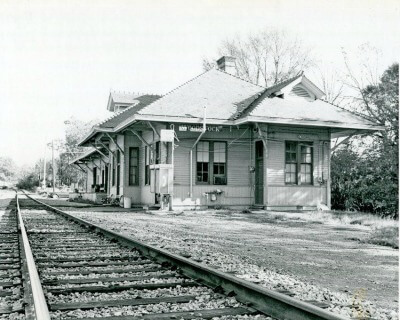 Today Woodstock is a bustling suburb of Atlanta and is one of the fastest growing cities in North Georgia. This is a far cry from its early beginnings as a place for mining and agriculture.

Cherokee County was formed in December 1831 from lands claimed from the Cherokee and Creek Indians.  The discovery of a 10-mile wide gold belt in the area led to the Georgia Gold Rush.  During this time, an estimated 3,000 men came to the area searching for gold.  Joined by their families, they settled into communities that were largely self-sufficient and self-contained.  With the Indians relocated to present day Oklahoma on the infamous Trail of Tears, the territory was open for mining and agriculture. The rush of settlers to the fertile rolling hills of Cherokee County led to the establishment of cities.

It is uncertain where Woodstock derived its name, but it is widely accepted that the city was named for Sir Walter Scott’s book by the same title.  Another theory suggests a connection to the busy train stop established for trains to restock their wood supply.  One widely discredited legend claims a Mr. Woodstock settled in the area and established a school by the same name.  Regardless of its true origin, the name of Woodstock has been recognized since 1833.

In the early years, most of the settlers in Woodstock and surrounding areas of Cherokee County grew cotton.  The Rope Mill produced cotton ropes that were used for plow lines and well-water buckets.   The Rope Mill and the first gristmills were powered by water flowing through Little River, Noonday Creek, and Etowah River.

The Marietta and North Georgia Railroad built a depot in Woodstock in 1879 as a stopping point on the line between Marietta and Canton.  At that time, Woodstock had a population near 300 spread over 960 acres.  The City of Woodstock was incorporated into the State of Georgia in 1897.  The current depot, located in historic downtown Woodstock, was built in 1912 to function as a passenger and freight depot.  The depot also served as a center of commerce for local items such as rope, cotton, and other agricultural goods.   Over the years the depot has been used as a fire station, city hall, community center, and for the past several years a restaurant.

The Woodstock Academy, an early Woodstock institution, was established in 1880.  This was the first school in Woodstock, built near Main Street and present-day Towne Lake Parkway.  Students attended the school for $1.50 to $3.00 monthly, used outhouses, and kept their mules in a neighboring property owner’s barn.

The end of the 19th century through the 1920s saw the development of downtown Woodstock as a commercial center for southern Cherokee County.  The Dean’s Store was established in 1906 and operated as the city’s general store for 75 years.  It remains in the Dean family as the Woodstock Visitors Center.  Stop in The Dean’s Store, “8588 Main Street, where yesterday lives and tomorrow waits,” for directions, information, or maybe even bump in to Juanita Hughes a life-long resident of Woodstock who is known to drop in from time to time.

Even in the early 20th century, Woodstock fostered an attitude of modern development that persists today.  1925 saw the first automobile in Cherokee County and the first street lights installed in Woodstock’s business district.  In 1929 the City of Woodstock paved Main Street with concrete, making an 18-foot roadway.  The layout of historic downtown Woodstock today remains much the same as it was in the 1920s.

Through the 1930s and 1940s, the poultry market developed into a thriving industry, greatly helping Woodstock’s agricultural economy.  Lake Allatoona was completed in 1949 and the power plant began operation in January 1950. The lake was originally planned and built to protect the downstream city of Rome, GA from Etowah river flooding and for power generation. This 12,000-acre man-made lake is now a magnet for recreational activities of North Georgians.

The early 1960’s saw the development of the first subdivision in Woodstock, Cherokee Forest, just south of Highway 92.  Highway 92 became the major thoroughfare through Woodstock after it was paved in 1963.  Less 20 years later, Interstate-575 was opened, connecting Woodstock to greater Metro Atlanta.

The 1980’s began the growth to this once agricultural area in the form of numerous subdivisions and businesses to truly shape the area as we know it today. After some years of decline, the downtown area has over the last several years enjoyed a revitalization with added businesses and homes as well as once again becoming the true community center of Woodstock.