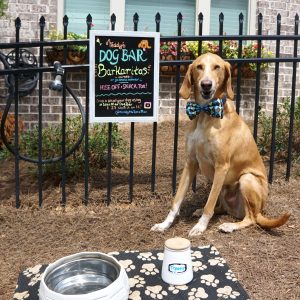 I didn’t go in search of a social media dog. I simply wanted a sweet companion for our dog Roxie, who recently had lost her hound brother, Buddy. So, imagine my surprise that, three years later, Teddy has more than 65,000 social media followers, is a Hallmark “star,” (He can be be found on a 2018 Hallmark Christmas ornament), has been on TV, featured in The Atlanta Journal-Constitution, has his own book, and is recognized by strangers on the street.

We adopted Teddy from Big Canoe Animal Rescue in October 2014, after volunteers found him tied up outside their shelter one morning. We specifically wanted another hound, not for hunting (we’ve never hunted a day in our lives), but because hounds are funny, sweet and make excellent family pets.

From day one, Teddy made the funniest faces I’d ever seen. And, boy, did he have energy. Watching him tear through the house with those long, gangly legs, with his ridiculously long tongue skimming the floor, he reminded us of a walking, talking cartoon character. He was funny, spunky and he cracked us up, thus earning the affectionate nickname Teddy the Spaz Man. Oh, and he loved the camera!

I immediately began sharing pictures of him on my personal Facebook page. My friends got such a kick out of his funny faces, they encouraged me to create a page for him. I thought, “Why not, he’s making my friends laugh, so this could be fun.” And, because Teddy’s expressions were so human-like, I naturally gave him a voice by adding captions of what I thought he’d say if he could talk.

Pretty soon, Teddy had this whole persona – a sarcastic teenage boy who loves to stir the pot and feud with his nemesis neighbor, Mr. Johnson, but who also has a heart of gold, is an animal advocate, and loves his family more than anything.

As Teddy’s personality grew, so did the number of his followers, as well as the number of messages I received thanking Teddy for helping them get through a tough time. Whether it was an illness, a breakup, or just a bad day, Teddy was making a difference in people’s lives, and that felt incredible. One mom wrote that Teddy played a role in helping their family bond, because, each night before dinner, they come together to look at his Facebook page and get a good laugh. Knowing that Teddy makes a difference in people’s lives has been the best, and most surprising, part of all of this.

Teddy’s all about spreading joy and kindness, and he’s brought that mission to downtown Woodstock the best way he knows how. He’s “opened” Teddy’s Dog Bar, a cooling-off station in front of his house, where dogs can grab a refreshing Barkarita (or you know, water), an organic treat, and even a water hose. This Georgia heat can be brutal on dogs, and after seeing two dogs collapse from heat exhaustion, Teddy thought it’d be a great way to help out his dog friends.

So, next time you’re on the Noonday Creek trail, between the trailhead on Market Street and Woofstock, feel free to stop by Teddy’s Dog Bar. Who knows, Teddy and his fur siblings, Yogi and Violet, just might be outside. They’d love to meet you!