Do you know what a Daikon radish is? It’s a delicious winter radish used primarily in Southeast and East Asian cooking. It’s known for its rapidly growing leaves and long, white root with multiple benefits:  possibly preventing cancer; being a natural diuretic; stimulating the digestive system; boosting the immune system, and improving bone health. It can be pickled, roasted, braised or boiled.

I wouldn’t know any of that if not for meeting Eric Velji, the owner of Forerunner Foods and co-owner of Flux Ice Cream. Eric has made his life’s work out of bringing healthy food to consumers through farm-to-table initiatives. 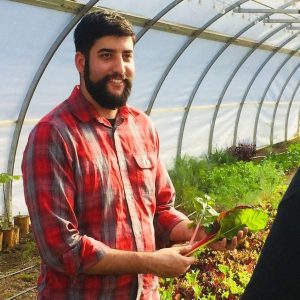 The Woodstock High grad grew up frequenting food trucks and local dive restaurants with his family, and that  set the foundation for his love of unique foods and flavors. After graduating from Kennesaw State University, he joined the workforce (in insurance, to be exact), where he determined that doing things because “that’s how they’ve always been done” was not going to fulfill him.

He turned to farming, a profession he respected and wanted to be involved in. In doing research, he determined farming isn’t always a reliable source of income. (Have you seen how crowded the farmer’s market is when it rains?) Eric realized local farmers needed to sell to multiple restaurants, and restaurateurs needed to have product from multiple farms. He put together a plan after realizing that farmers and chefs work very different hours.

Acting as a mediator for restaurants enables him to handle the back and forth with the farmers, while working with their unique schedules. His farming knowledge allows him to educate restaurants on the origins of their food (and how to pass that info to their customers), and save them money on products grown locally. 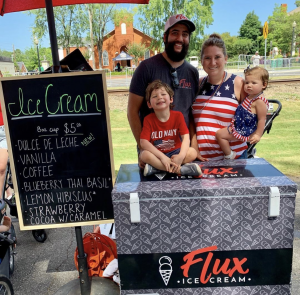 Over a beer with a local chef, the two realized there was a hole in the market for fresh, local, homemade ice cream. They dreamed up the idea that people might like the taste of ice cream without artificial colors, emulsifiers and artificial flavors. Using fresh, in-season ingredients, they began making batches and now their Flux Ice Cream (as the seasons fluctuate, so do the ingredients) can be found in pop-ups all over Cherokee County.

In true entrepreneur style, Eric is working on a community supported agriculture program that will offer weekly produce boxes to Cherokee residents. Each box, enough to feed a family of four, will feature 80% to 90% of commonly known items, while the rest introduces them to unfamiliar ingredients. Cooking instructions will be included.

After talking with Eric for just a little while, it was clear he is a man full of great ideas. However, that entrepreneurial spirit can come at a cost. When I asked about his work-life balance, he said, “There is none. It’s all happening at the same time.”

His life doesn’t have a daily routine to set a clock by, but on the day of our interview, he knew the tasks he had to do for his business and the family time that was ahead: having dinner with his wife and two young kids.

Maybe blend would be a better word than balance. How ever, Eric does it, we appreciate his efforts in helping farmers, and making it easier for all of us live healthier lives.