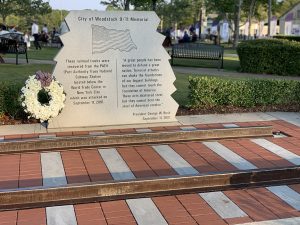 People often wonder how the 9/11 memorial in Woodstock’s Park at City Center came to be. In 2016, a Woodstock resident made city leaders aware of a newspaper article concerning the Port Authority of New York and New Jersey distributing artifacts salvaged from ground zero after the 9/11 attacks on the World Trade Center. Distribution of these artifacts was being offered as a way to remind future generations
of the events that occurred on Sept. 11, 2001.

Mayor Donnie Henriques sent a letter to the Port Authority requesting the city of Woodstock be considered for an artifact. Several months went by before notification was received that Woodstock had been selected to receive two 12-foot sections of subway track that were from the subway station located beneath the World Trade Center.

On May 25, 2016, two Woodstock Public Works employees attended a ceremony at John F. Kennedy International Airport in New York, and they retrieved the sections of track from a storage facility to return to Woodstock. A permanent memorial was designed around those tracks, and it is located in the Park at City Center in downtown Woodstock. The memorial serves as a reminder, to generations of Woodstock residents, of that fateful day when close to 3,000 people lost their lives in the largest terrorist attack in history, on our nation’s soil.

This year marks the 20th anniversary of 9/11. Since Sept. 11, 2006, the city of Woodstock has hosted the 9/11 Day of Remembrance Ceremony. Each year, members of the community gather in Woodstock on Sept. 11 in observance of sacrifices made and with the solemn reminder that we should not take our freedoms for granted. We remember those we lost and honor our first responders, as well as the service men and women who continue to serve, fight and sacrifice for our freedom and safety.

– Stacy Brown is the marketing and communications manager for the city of Woodstock. 770-592-6056.sbrown@woodstockga.gov.