Changes to Include Time Limits, New Spaces and Structures 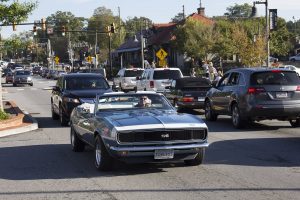 After approximately a year of studying and discussing options for additional parking availability in downtown, the Woodstock City Council recently gave staff a direction in which to move forward.  In mid 2016, Woodstock hired the parking management service firm SP+ to update a 2012 parking study and provide recommendations for how best to move forward.  The update provided length of stay information that had not been collected in the 2012 study, but provides important insight into where the issues in the system are.  It was found that parking capacity is not necessarily an issue, however extended parking and convenience do factor into the equation.

The downtown parking system has approximately 1,300 publicly available spaces, but when coupled with private controlled commercial parking, that number grows to more than 1,700.  The study focused on the core area, which included 783 public spaces.  These spaces are the public on-street parking areas along Main Street, East Main Street and Chambers Street and the public off-street parking lots on Wheeler Street, Mill Street and at City Center.
When studied, it was found that 86 percent of on-street parking spaces were occupied, while only 9 percent of off-street parking spaces were occupied.  Additionally, 37 percent of all on-street parking spaces were occupied for three hours or more during the lunchtime rush of 10 a.m.-1 p.m.  These numbers tell us that the available off-street spaces are not being utilized to their potential and that the stays of more than three hours are most likely employees and/or residents.  By not adding any additional inventory and time limiting particular parking areas, the current system could hold an additional 284 vehicles.

Two solutions were presented by SP+: a paid parking system or a time-enforced system in the 283 highest demand parking spaces.  Each of these solutions would provide a maximum parking ability within those spaces of three hours.  After several discussions between city council and the Downtown Development Authority, consensus was reached to take the initial step of the time-enforced system with a maximum stay of three hours.  Keep in mind that out of 1,300 public parking spaces, the enforcement will only occur in spaces along Main Street, East Main Street, Chambers Street and the Wheeler and Mill Street parking lots, which total 283 spaces or 23 percent of total parking downtown.  This program is expected to roll out in January 2017 with a large marketing and promotional learning campaign as a part of it.
In addition to this, the city has added an additional 30 +/- spaces in the lot at City Center and improved pedestrian access to Main Street and is currently working on a gravel parking lot on Mill Street near the trailhead for Noonday Creek Trail, which should add another 40 +/- spaces.
Several proposed developments around the downtown area will also add parking structures, in which the city plans to partner to add public inventory within these developments as well as ongoing plans for a public deck at City Center.  Wayfinding signage has been added, which helps visitors and residents find some of the lesser-known parking areas that are sometimes just as close to their destination as the on-street parking that is in such high demand.

It is our hope that some of the small improvements that have been done as well as ongoing planning in both private and public developments can help satisfy the parking demand.  While a “parking problem” can certainly be a frustrating issue to have, what it really tells us is that Woodstock continues to be a place that people want to be and we certainly hope that continues and that we can address the frustrations in short order.