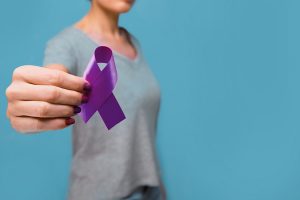 “Thirty-one-year-old women don’t get pancreatic cancer. They just don’t.” Those were the words Woodstock resident Elizabeth O’Connor heard from friends and family when she received her diagnosis of stage 4 pancreatic cancer. Elizabeth had experienced a difficult second pregnancy, which resulted in her son being born six weeks early. Doctors discovered the cancer not long after she developed a blood clot in her arm.

Elizabeth was told she had a matter of months to live. The outlook was grim, and she and her husband, Patrick, felt defeated. But, she had deep faith, the love and support of her family and community, and a team of doctors who were, and still are, committed to her survival. In fact, this month, she celebrates 11 years as a pancreatic cancer survivor.

Elizabeth credits the constant support of her family and community for keeping her going during dark times. She and Patrick, along with her parents, Randy and Judy Dobbs, became advocates for others fighting this disease. They work with Purple Pansies, a local group that encourages early detection and strives to boost survival rates. In August, she told her story nationally on the Stand Up 2 Cancer (SU2C) Night 2021 telecast, which can be viewed at https://standuptocancer.org/su2c-show. Elizabeth’s story begins at 48 minutes and 49 seconds into the video.

She has done more than she realizes for others affected by the disease. According to staff members at SU2C, “Elizabeth is the reminder that pancreatic cancer doesn’t have to be a death sentence. It’s important to support research that makes her story the norm.”

Elizabeth doesn’t just have a great network of support; she also has a superb team of doctors, led by Dr. Daniel Von Hoff, who is one of the original co-leaders of SU2C’s Pancreatic Dream Team. Von Hoff immediately put her on a regimen to maximize the effectiveness of her chemotherapy, and introduced her to other doctors and surgeons who joined her fight.

“I dreaded the oncologist’s office, because I knew they were going to give me a death sentence. But Dr. Von Hoff continues to fill me with hope instead of dread, and that makes all the difference,” Elizabeth said. She remembers Von Hoff told her that nobody holds a crystal ball to your life. “It made me feel like there was hope,” she said. “He made me believe we could fight this thing and win.”

Over the past 10 years, Elizabeth has had lung surgery, brain surgery and brain radiation. But, she also has been given so much hope. She emphasizes that hope is the one thing that can’t be undervalued.

When asked what her local community can do this month to celebrate and honor her survival, her request was simple. “Wear purple and tell people why,” she said. Purple is the color for pancreatic cancer month. Elizabeth would love to see Woodstock go purple in November, so that more people can learn about pancreatic cancer and find the same hope she was given by her doctors and SU2C.

– Merry Quarles, the manager of FoxTale Book Shoppe, mom to five grown boys and wife to Michael. She has lived in Woodstock for 41 years.