Life Sliding, a book and film by Woodstock’s own S.I. Maudlin will be having their charity fundraiser book signing and film trailer release party tomorrow evening at the Etowah High School Auditorium. The book was initially a screenplay that Maudlin adapted into a book after pitching it to a film agent and the agented asked if it were based on a book. Using the screenplay as an outline, Maudlin created Life Sliding, the book. 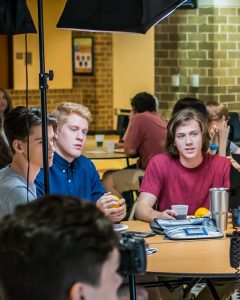 The book and film follow the main character, Gavin, a rising high school senior as he struggle with his status as the “most popular kid in school,” and the need to be the person he is, not who he feels he has to be because of his status. His father sends him to camp Lift Me Up, forcing Gavin into an unfamiliar world. When he and three others form and unlikely friendship and try and shake up the social order at their high school during the new school year, their plans are thwarted by a jaded person jumping to conclusions. Will they be able to survive the fallout of what they’ve put into motion? You’ll have to pick up the book or watch the film to see!

Join this entirely local cast and crew for a night of book signing, music, celebration and fun. The premier is sure to be an exciting event for those involved in the film as well us our local residents. It’s been a thrill watching Cherokee county grow in the film industry and to see so much local goodness on film, well that’s a rare treat.