At Goshen, we think of our alumni as family. That means keeping in touch as they navigate their new lives outside of foster care. We’ve received some exciting updates from some of our program graduates: 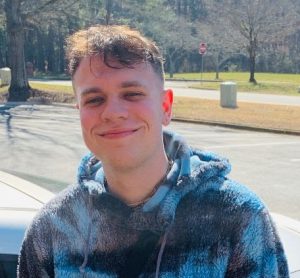 Sebastian
Since Sebastian transitioned to independence, he has committed to making healthy choices in his life. He has begun a pescatarian lifestyle, which he feels very positive about, and has decided to return to postsecondary education at Georgia Gwinnett College. Recently, he spent the weekend in Missouri with Goshen New Beginnings staff, to surprise his fellow alumnus, Robert, for his graduation from Army basic training!

Sebastian said that he is very excited to continue pursuing his academic goals. Way to go, Sebastian!

Nina
Since moving to Chicago for college, Nina has been thriving. She experienced her first snowfall and has made lifelong friends. In her first semester at DePaul University, she made all A’s and is excited about how much she is learning about her major: film and television.

Although Nina is committed to doing well academically and vocationally, she always makes time to enjoy being with her friends at Lake Michigan and eating hotdogs at Portillo’s. We are so proud of Nina!

Robert
Robert has become Goshen’s 11th alumnus to join the military! Before leaving Goshen New Beginnings, Robert made the decision to join the U.S. Army.

Upon graduating from our program, Robert traveled to Missouri to attend basic training. He said that Goshen’s continuous love, support and care packages keep him motivated to succeed. During basic training, he trained in a gas chamber, rappelled from a 50-foot tower and completed his rucksack run.

Our staff from Goshen New Beginnings was so excited to surprise Robert at his graduation from basic training!

The program director, Giselle, said that Robert was in tears when she called to tell him their plane had landed in Missouri, and that they were on their way to see him. Robert’s friend and fellow New Beginnings alumnus, Sebastian, also joined in on the surprise!

Robert said he got in trouble, because he simply could not wipe the smile off his face.