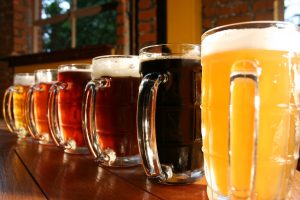 “It is not from the benevolence of the butcher, the brewer, or the baker that we expect our dinner, but from their regard to their own interest.” This excerpt from Adam Smith’s “The Wealth of Nations” is a simplistic explanation of capitalism and why it works. We don’t expect producers to make products for us because of their inherent goodness. We expect them to do it because they can be richer for it. The pursuit of profit drives action that can benefit everyone. It’s why capitalism, as an economic system, has pulled more people out of abject poverty than any other system in history.

Many of you have seen me fighting the last several years to change Georgia’s laws that govern craft beer and wondered why I spend time on the issue. Admittedly, our republic does not hang in the balance, dependent on whether or not our state is the best or worst place for craft brewers. However, Adam Smith’s words can lend insight into why I have focused on these entrepreneurs. I find it fitting that he mentions brewers in his statement about profit motive. On average, a brewery in any state that isn’t Georgia is two and a half times as profitable as a brewery in Georgia. This is entirely due to legal restrictions we place on our brewers that aren’t imposed by our sister states. For example: We remain the only state in the Union that does not allow a brewery to sell beer. You can buy a suit from a tailor, shoes from a cobbler and wine from a winery, but the manufacturer of beer cannot sell beer. This is just one example of some of the onerous restrictions we place on our brewers. Remember: it’s something that we do, and 49 other states do not.

When I’m pitching this issue to a group of constituents, my favorite way to start is to ask who in the room does not drink beer. I always get a fair number of hands, and I do this so that I can help them understand why an open beer market should matter to every Georgian. So let’s assume you’re not a beer drinker: why should you care?

One of the best advantages of our nation is that we can compare the successes and failures of policy from state to state. This is why state legislatures have earned the reputation of being the laboratories of democracy. When comparing Georgia to other states with successful craft beer laws, one of our closest examples is a combined comparison to the states of Colorado and Oregon. That is because the combined drinking age populations of these two states is equal to Georgia’s, providing a comparable market for the industry. Colorado and Oregon boast roughly 14,000 direct brewery jobs (not even accounting for the auxiliary jobs that come with shipping, retail, etc. when breweries grow). Georgia, with a nearly identical market but more restrictions in our law, has fewer than 1,300 brewery jobs. That means we leave 12,700 jobs on the table. That’s enough to drop Georgia’s current unemployment rate from 5.4 to 5.2 percent.

Georgia is the No. 1 state in which to do business, unless your business is beer. Whether or not one drinks beer, it benefits all citizens when our unemployment rate remains low and Georgians are engaged in productive and lucrative work. This industry is not like many we deal with in economic development — businesses looking for tax credits and incentives to bring a meager number of jobs from just over a border. They are home grown. They expect no incentives. They don’t require convincing. They simply need our lawmakers to permit them to do business and to sell their product. This is a mission that I believe we can accomplish and that all Georgians will ultimately benefit from.

Senate Bill 85 has been introduced as a combined effort on behalf of our beer wholesalers and brewers in Georgia to right these wrongs. It’s a tremendous move toward craft beer freedom and economic freedom in Georgia. I remain extremely optimistic that we can get this legislation to the governor’s desk this year, and I’m proud to have been a part of this fight.

If you ever have any questions for me, please feel free to reach out to me on my cell phone at 678-523-8570 or email me at Michael@caldwellforhouse.com. You can also meet me at one of my Weekly Coffees with District 20 nearly every Saturday at Copper Coin Coffee in downtown Woodstock.

Thank you again for allowing me the honor of representing our families in Georgia’s General Assembly!