The Woodstock Community Mural was completed in 2018. Artist AnnaLysa Kimball shares some of the stories behind a few of the panels from the mural, which includes past and present life moments in our city. There are many historical details within the masterpiece. 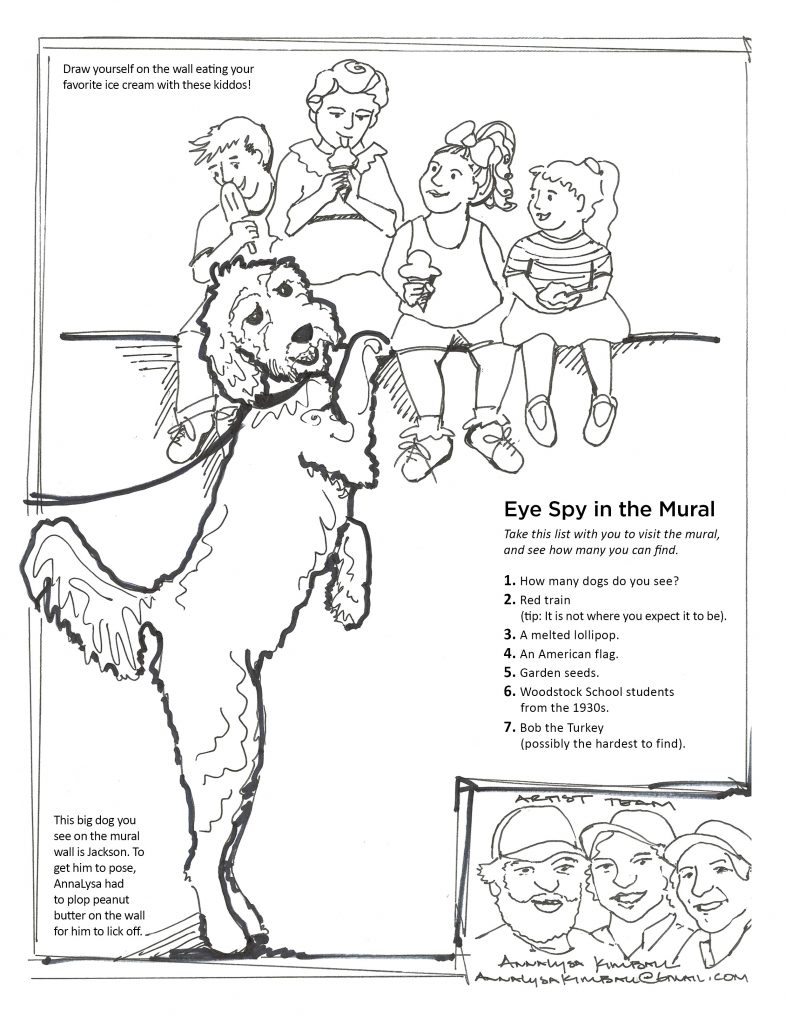 Pioneers began to settle in Woodstock in the early 1830s, shortly before the time that the Native Americans were being removed from the area. Postal records show Woodstock had a postmaster beginning in 1833, and other documents confirm the organization of churches in the area at the time. The first settlements were near waterways, Little River, Rose Creek, Rube’s Creek, and Noonday Creek, where pioneers farmed the land and were largely self-supporting. While there were nearby skirmishes, the area escaped major destruction during the Civil War because there was no rail line to serve as a target.

After the railroad and its depot became a reality in 1879, the little village came to life. The railroad was a lifeline, bringing industry and entrepreneurs, and allowing farmers to ship their cotton to mills far and wide. There would not have been a City of Woodstock had there been no rail line. Cityhood was inevitable, and on Dec. 8, 1897, Georgia’s legislature granted a charter and Woodstock became an official city. The census of 1900 showed the population to be 276. Boundaries were set at ¾ mile north and south of the depot, and ½ mile east and west of the railroad tracks, making the depot the exact center of town, literally and figuratively. A new depot was built in 1912, a combination station offering freight and passenger service. It was in operation until the 1950s.

The town prospered and grew. All manner of businesses, from cotton brokers to bankers, blacksmiths, and barbers, lined the west side of Main Street, while cotton warehouses occupied space on the east side. North of town, on Little River, Woodstock’s first industry used cotton to produce rope, and the remains of the Rope Mill can be seen today. All over town, beautiful homes began to take shape, complemented by a school and churches and in-town farms.

Throughout the decades since, the town’s residents have enjoyed the many positive aspects of small town life, while continuing to progress with the times. From the paving of Main Street in 1925 to the arrival of Interstate 575 in 1982, and from the notoriety of native son Lew Carpenter as the Southern League’s Atlanta Crackers’ 1940 Star Pitcher to the national spotlight as President George H. W. Bush kicking off his 1992 re-election campaign from a makeshift stage on Main Street’s sidewalk, Woodstock has made a name for itself. Two native sons, Dean Rusk and Eugene Booth, were Rhodes Scholars. One would become the nation’s Secretary of State, and the other would be a renowned physicist and a member of the Manhattan Project team who developed the atomic bomb.

The town has been blessed with dedicated physicians throughout its history. Perhaps the one doctor who stands above others is William Hiram Dean. Having moved to the area around 1850, he soon began a medical practice while also serving as a Baptist minister. His only son, Will Dean, also became a doctor and was on Woodstock’s first city council. He opened Dean’s Drug Company on Main Street in 1906, but died soon afterward. The store serves today as the Woodstock Visitors Center, preserving relics of days gone by. During the following years there were several other doctors in the area, but the name most often mentioned is that of Dr. T. J. VanSant, who practiced until retiring in 1962. Dr. Evan Boddy then opened a medical center, and in 1969 the Cherokee Atomedic Hospital was added to the complex, which would later include an apothecary and a nursing home. The circular hospital structure had been on display at the 1964 World’s Fair as the “Hospital of the Future,” featuring computers and microwaves, novel items at the time. The grand opening was held July 20, 1969, the day Americans first landed on the moon.

Although some visible Woodstock landmarks remain, many survive only in memory. Towne Lake Parkway was once Church Street, a narrow lane leading to “parking lots” for the churches where early worshippers tethered their horses and parked their buggies. While many original homes have succumbed to the wrecking ball, others now house businesses. A few treasured homes still serve as residences, some for descendants of the original owners. The oldest house in Woodstock is the Dean House, the former Cherokee Ledger-News office beside The Park at City Center on East Main Street. The city celebrated its centennial in 1997 with parades and activities, including a Centennial Quilt, the development of the City Park, installation of plaques on historic structures, and the publication of a history book. That group is still involved with historic preservation and operates as Preservation Woodstock, Inc.

Native Americans have inhabited the place we call Cherokee County for thousands of years; numerous archaeological investigations reveal Cherokee County was occupied 11,000 years ago by the Paleo-Indians and then by the Cherokee Nation. During the 1700s, the Cherokee towns were self-sufficient and self-governing, and each person was a member of one of the Seven Clans of Cherokee. Continuing their efforts to adapt to white culture and keep their lands, the Cherokee established a government with the capital at nearby New Echota.

Despite the national unease over who controlled the Cherokee territory, the white settlers began moving to the area in the mid-1700s and, by 1831, the new Cherokee County was created, which originally encompassed all territory west of the Chattahoochee River and north of Carroll County. Soon after the formation of the county, this area was dotted with gold mines and encampments of miners. Most miners did “placer mining,” which included surface mining or panning for gold in the many rivers and tributaries. Larger operations concentrated on mining vein deposits.

The best-known mines were the Franklin, Pascoe, and Sixes mines, which yielded gold and other minerals for decades. As the gold supply dwindled, many people from Cherokee County left for the west after gold was discovered in California in 1848.

During that time, Georgia and the federal government continually pressured the Cherokee Indians to give up their lands, until finally creating legislation that took their land and forced them out. In 1837, local removal forts were built at Fort Buffington and Sixes. In 1838, soldiers forcibly evicted the Cherokee and sent them to the forts. In Cherokee County, 950 were sent from Sixes and 450 from Fort Buffington. They joined more than 15,000 on the Trail of Tears and estimates say that approximately 4,000 did not survive the journey west.

During the mid-1800s, the Etowah Valley became the industrial hub of north Georgia. In addition to gold, other minerals mined in Cherokee County included iron ore, copper, titanium, quartz, mica, granite and marble. During this time, Cherokee County had as many as 10 grist mills, 14 sawmills, seven flour mills, and 12 distilleries and a population of about 12,000.

The years leading up to the Civil War were prosperous for Cherokee County. Agriculture was the main industry in the area and small farms dotted the landscape. As in the rest of the South, whites purchased blacks and forced them into labor. The slaves in Cherokee County made up 9% of the population and of the 150 residents who owned slaves, most owned fewer than four.

Although soldiers fought no major battles in Cherokee County, they did frequently forage in the area for supplies, and there were many skirmishes between the armies. The order to burn Canton was issued in October 1864 and at least half of the town was burned, including the courthouse and the bridge over the Etowah River. The order may have been issued because Georgia Gov. Joseph E. Brown had lived in Canton.

For Cherokee County’s enslaved blacks, the end of the Civil War in 1865 brought freedom and citizenship. Many former slaves worked as sharecroppers, some on the same farms they worked before the war. New black communities were settled, including Hickory Log near Canton. Some of the land in this area was given to the freed slaves by their former owners, the Keith family.

Life was hard, though, for almost everyone in Cherokee County — the gold rush was over, boomtown Atlanta was attracting talented people and investment dollars from Cherokee County, and the wounds of the Civil War were still fresh. When the railroad rolled into Cherokee County, it opened new markets to farmers and industrialists. In May 1879, the railroad linked Woodstock to Canton and two years later it extended to Ball Ground, where the first train arrived in May 1882. Farmers began to send their cotton to larger markets and mills flourished. Trains also made it possible for marble finishing plants in Ball Ground, Nelson and Canton to flourish using marble quarried from Pickens County.

Cherokee County continued to prosper, and in the 1920s experienced a surge of growth. During this decade, the population grew to more than 20,000 and new construction flourished throughout the county. The new buildings in Canton included the marble courthouse, a post office, Canton High School, and Baptist and Methodist churches.

After the Great Depression, which Cherokee County withstood better on average than the rest of the country, the economy slowly began to improve. After the attack on Pearl Harbor, men from Cherokee County enlisted in the service and in May 1942, women could join the Women’s Army Corps. While the soldiers were away, the families at home dealt with the stringent rationing of goods; others planted victory gardens to supplement their food supply. Numerous women also went to work to support the war effort and their families.

The poultry industry that began during the Great Depression grew dramatically during World War II. This continued through the 1950s and 1960s, bringing prosperity to Cherokee County. During the late 1950s, Cherokee County was known as the “Poultry Capital of the World” and billboards proclaiming this fact greeted everyone as they entered Cherokee County. The surge of the poultry industry created much needed job opportunities in hatcheries, feed stores, rendering plants, processing plants and equipment manufacturers.