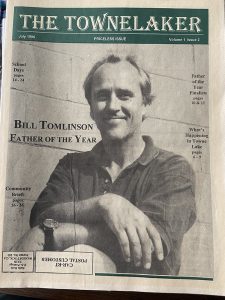 On the cover: Bill Tomlinson, who was chosen as the TowneLaker’s Father of the Year.

• Home sales: 4,000 homes closed in Towne Lake in June, 1996, pushing developers closer to the estimated 8,000 homes to be built.
• Bill Tomlinson was named Father of the Year, nominated by his 10-year-old daughter, Melissa. See then and now photos on Page 17.
• In business briefs: State Farm agent Steve Cannon announced the grand opening of his business, in the parking lot next to Publix, where it still stands. The Bank of Canton opened in Towne Lake. Rumors were circulating that Pike’s would open a 10-acre super store next to Kroger, and a Ford dealership would open in the area.
• In school news, 900 seniors graduated on June 1, with the following breakdown: Cherokee, 210; Etowah, 280; Sequoyah, 330, and the Open Campus Evening School, 72. For comparison, in 2020, 2,954 seniors graduated: Cherokee, 561; Creekview, 479; Etowah, 550; River Ridge, 409; Sequoyah, 429, and Woodstock, 526.
• Woodstock Middle and High schools were set to open in August, 1996.
• Kris McKeeth was given the Pathfinder award, and 17-year-old Jacob Thomas, an Etowah student, was Student of the Month.
• On the celebrations page, Emily Robertson, Alyson Pfrimmer and Michel Punch were celebrating 5th birthdays. 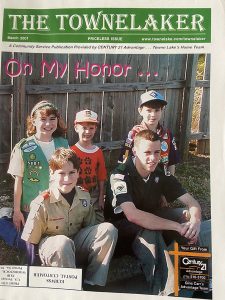 • Best of the Best (now called Readers’ Choice) winners sound familiar. Dr. Thad Baird won best dentist in 2001, and Baird Family Dentistry won in 2021. MIK Cleaners also won in both years.
• Sidewalks in Towne Lake were to be completed in summer, 2001; a traffic light at Eagle Watch and Towne Lake Parkway also was to
be added.
• Woodstock Square had a grand opening March 9-11 (the plaza on Highway 92 with Target).
• Publix at Buckhead Crossing opened.
• A feature was done on the Paint n Plaster Fun Factory, which was owned by Lauren and Danielle Nagle, 15- and 16-year-old sisters and students at Etowah.
• Wild Birds Unlimited opened, and Manhattan Bagel closed. 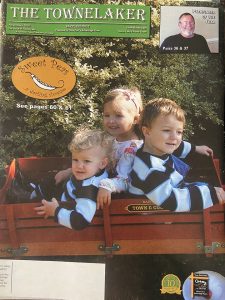 • Meridian at Ridgewalk subdivision started construction.
• Parkside Grill opened on Bells Ferry across from Hobgood Park
• Beef O’Brady’s, beside the Rose Creek Publix, closed.
• Tuscany Italian Restaurant opened in June, 2006.
• The Towne Lake Business Association (TLBA) announced updates, upcoming events. ALM still shares news from the TLBA.
• Readers learned about Taylor Dakake, who was adopted by a Woodstock couple and had just graduated high school. ALM ran a follow-up on him in January, 2021, after he contacted us to see if we’d like to share an update. 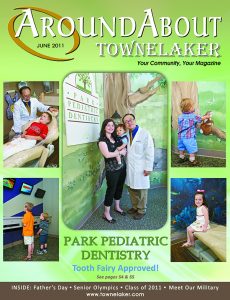 On the cover: Park Pediatric Dentistry, which still advertises with ALM. 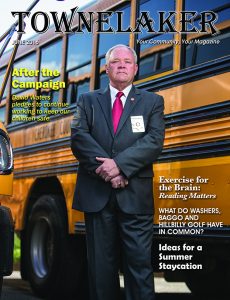 On the cover: David Waters, a candidate for Cherokee County Sheriff.

• Heritage Presbyterian Church announced it has a new pastor, the Rev. Elizabeth Milford, who now is a contributing writer to the TowneLaker.
• An advertorial announced the opening of Camellia Place.
• Eyes on Towne Lake to open in July.
• K9 and Kitty opened on Bells Ferry Road, near Goodwill.
• Burn Boot Camp on Parkside Lane was gearing up for the first summer camps.
• The Law Office of Jay G. Wall opened at Buckhead Crossing.
• Cherokee Office of Economic Development President Misti Martin was named one of North America’s Top 50 Economic Developers.
• Michael Caldwell was the state representative for District 20, and a regular contributor. 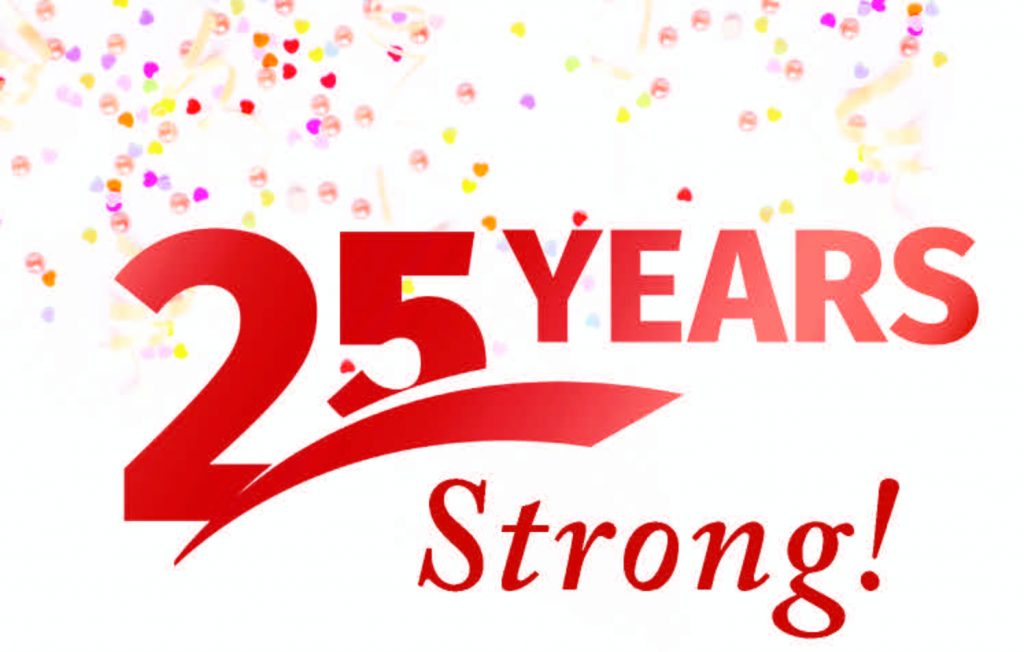 Your Community. Your Magazine.

As the county’s longest standing community publication, we’ve had a chance to build strong relationships over the past 25 years, celebrating our residents and supporting local businesses. Our motto is more than just a saying: Your Community. Your Magazine. Over the years, we’ve opened our pages to the community in ways too numerous to count. Here are a few examples of how we’ve shared life with you, and been here to help your businesses grow.

It was 1997 when I moved to Cherokee County with my wife, Ann, and our two small sons. I was fresh off the wards of Grady Hospital in downtown Atlanta, having just finished my OB/GYN residency with Emory University. I chose to take a position with Cherokee Women’s Health Specialists, the sole OB practice delivering babies in Cherokee County.

The obstetrical care we gave our patients was superb, but the problem was this: Pregnant women in Towne Lake and Woodstock were choosing to deliver their babies in Cobb County. It was a problem of perception. Canton’s hospital at that time, R. T. Jones (the hospital’s name prior to Northside’s acquisition), did not have an illustrious reputation for obstetrics services.

How could I let women know they could receive great obstetrical care right here in Cherokee County?

Ann had noticed a local publication called the TowneLaker. She enthusiastically showed me the magazine, which had lists of churches, elected leaders, community groups … and, most of all, stories about local people and businesses that helped you get to know the people in the community

Ann suggested we advertise, and that I use the story space to let the community get to know me. And that was the beginning of a long relationship. Month after month, I shared stories about patients, the lessons I learned from being a doctor at Grady Hospital, of how faith is essential to healing, and, later, stories about the lessons of marriage and raising kids.

And, it worked. The magazine connected me with the community. I can’t tell you the number of patients who have come into my office over the past 20 years with a bright look, saying, “I feel like I know you from the magazine!” And I can look back at the photos of our physicians on the Aroundabout covers and trace the history of our group, as it has grown from a local to a national practice over the past 20 years, now drawing patients from across the country, New York to California.

It has been a long partnership between the Aroundabout magazines and Cherokee Women’s Health Specialists, and I truly can say they are a part of our practice story, as much as we are a part of theirs.

As the founder of Towne Lake Family Chiropractic in 1995, and as the first chiropractor in Towne Lake, I was eager to let the community know what services were offered at our clinic, my background, and, of course, our basic contact information. The internet was still in its infancy, and the smart phone wasn’t invented yet. Print advertising was the only way to “get the word out.” I was excited to be one of the TowneLaker’s inaugural advertisers, which helped our clinic enjoy explosive growth in the early years of existence, and maintain a healthy presence in the years since. We were honored to be the first local business featured on the cover in 2002, which resulted in an incredible amount of positive recognition.

We have continued to advertise in the Aroundabout publications for the past 25 years, because they are able to reach our target audience in a specific geographic area, unlike the larger, more expensive news publications. We’ve really enjoyed our long-standing relationship with the TowneLaker.

On a final note, I’m proud to announce that Dr. Amber York will be the new owner of Towne Lake Family Chiropractic within the next month. She, along with Dr. Rob Holewinski, will continue to provide chiropractic care to this wonderful community.

TowneLaker’s Father of the Year
July, 1996

Bill Tomlinson won the TowneLaker’s Father of the Year contest, thanks to an essay written by his 10-year-old daughter Melissa, and was featured on the July, 1996, cover. She wrote: “I think my daddy is the best dad in the world because he is sweet and I love him. He is trying very hard to stop smoking and he is doing it just for me. It is hard for him but he is toughing it out. That shows how much he loves me. So that is why I think he should win.”

We asked for an updated family photo; it’s clear, his family has grown quite a bit!