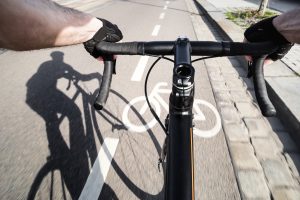 Recently, I was patrolling downtown Woodstock at about 2 a.m. when I saw something slightly out of the ordinary for that time of day — a cyclist. But, what really caught my attention about this cyclist was he actually was riding on the roadway, following all of the laws. He even had the safety equipment required by law, and he was riding on the rightmost side of the roadway. There was a front-facing headlight for the bike, as well as a rear flashing light. The cyclist also stopped at all the stop signs and red lights in his path. It was very refreshing to see; as opposed to what I often see, which are cyclists ignoring one or more of the rules of the road, even at their own peril.

This made me think that with as many cyclists in Woodstock, perhaps only a few actually know the laws. If I’m being completely honest, I was not fully aware of all of the laws regarding cyclists myself, until my career in law enforcement began.

On a daily basis, Woodstock has a host of cyclists, from casual riders to professionals, on our roadways. But, how many cyclists actually know the laws, and why they are important? Georgia law on this subject is surprisingly lengthy, but for good cause. The Official Code of Georgia (O.C.G.A.) 40-6-290 through 40-6-299 covers the cyclists’ responsibilities. These laws can be summed up as follows:

There also is a list of prohibited modifications to bicycles. For the most up-to-date laws, visit www.gahighwaysafety.org.

But, laws that apply only to cyclists leave somewhat of a gap. Doesn’t the motoring public have a responsibility to cyclists as well? Yes, and Gov. Brian Kemp recently added to the existing laws, making the roadways safer for cyclists to enjoy. O.C.G.A. 40-6-56 states: “Motorists shall approach cyclists using due caution and, if possible, safely make a lane change if roadway and traffic conditions allow before passing. If a lane change is not possible, the motorist is to reduce speed to a reasonable speed that is at least 10 MPH lower, or to 25 MPH — whichever is more — before proceeding around the cyclist, with at least 3 feet between the vehicle and the bicyclist at all times.”

These laws are intended to keep everyone safe and happy on the roadways. I have seen motorists and cyclists ignore these laws and get impatient or frustrated with one another. Ignoring laws can lead to people getting hurt or even killed.

If you are a cyclist, I implore you to read the laws, and practice them on your rides. Please don’t be “that” cyclist that yells for people to share the road and then disobeys the law.

As a motorist, you have a higher responsibility, per Georgia law, to use due regard and caution when approaching or passing a cyclist. As motorists and cyclists, it’s all of our responsibility to follow the laws, because, when we don’t, the results can be catastrophic.

I hope together we can make rides through Woodstock safe and enjoyable for everyone.

– Officer Buckner is a six-year veteran of the Woodstock Police Department and currently is lead traffic officer in the Traffic Enforcement Unit, specializing in DUI enforcement and fatality/serious injury crash investigations.