Local resident Felicia Flores has something in common with such celebrities as actresses Jada Pickett Smith and Viola Smith, as well as models Tyra Banks and Naomi Campbell: alopecia or baldness.

To create awareness and support, Flores has created an event called BALDIE CON. She’s hoping it will shed light on alopecia, which is hair loss from part of the head or body (https://bit.ly/3QxFjsI). Among the known causes of alopecia are lupus, cancer treatments or even baldness by choice. It affects women, men and people of various races.

Flores began to experience alopecia following the birth of her daughter. “First, I noticed a spot or two on my scalp a year after I had my daughter,” she said. “It was about 2006 when I went through a traumatic experience that my hair just started coming out in clumps. At that point, I had to cut it off. It never grew back.”

She consulted dermatologists and tried various treatments with no results. “So, I gave up on any additional medical treatment and accepted that this was my fate,” Flores said. 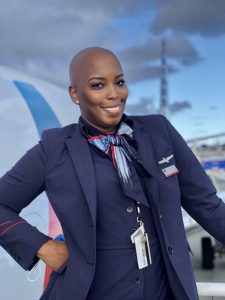 The airline flight attendant wore short wigs for seven to eight years. Neither family nor friends knew she was bald until 2015, when she revealed to everyone that she had alopecia.

“It was a scary time for me, but I also felt relief that I didn’t have to hide anymore,” she said.

When asked if she had been discriminated against or harassed because of her baldness, she replied: “I wasn’t really teased because of it, more so treated differently in the dating world. Most guys want a woman with hair, so in that aspect I felt discrimination. I didn’t fit the status quo of beauty because of my bald head.”

She received the opposite response from her employer. Flores explained that American Airlines has been very supportive of her appearance since she revealed her baldness.

As an advocate for those who have alopecia, the mother of two introduced BALDIE CON with a soft launch last month in Atlanta. She describes it as a conference and a community of supporters. The goal of the event is to show all “baldies” how important they are and how inspirational they are to those around them. It encourages others to fight hair-based discrimination and promote acceptance of bald people everywhere. Additional information is available at www.baldandfree.org and @baldiecon on Instagram and Facebook.