So far, we have had a fantastic season here at Elm Street. Our “16-17 Season of Perspective” is about halfway through and (we think) has offered some perspective, and maybe a little fun. Whether you’ve seen “Urinetown,” “The Glass Menagerie” or our beloved “A Christmas Carol,” we thank you for attending our Season of Perspective.

We have an opportunity coming up that I want to share with you. People like musicals, in fact, if you were to name a popular show that has been on Broadway you would probably name a musical. Which is great, but sometimes plays don’t always get as much attention. We are doing a play this February, and it is hilarious. It’s called “Laughter on the 23rd Floor” and it is by Neil Simon, a brilliant playwright. Here are a few thoughts about why I am excited for you to see it. 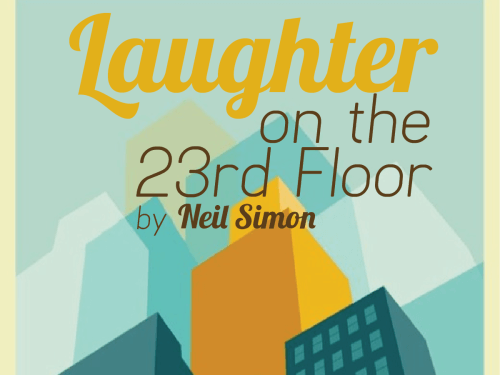 There’s something about New York City in the 1950s. It was a horrible time in crucial ways (sexism, racism, McCarthyism), but on the surface, it was lovely. Americans dressed up for the office, took three-hour lunches and seemed to smoke and drink blithely with little thought of the consequences. All that postwar confidence!

“Laughter on the 23rd Floor” was inspired by Neil Simon’s early career experience as a junior writer for “Your Show of Shows” and “Caesar’s Hour.” In fact, many consider this show to be semi-autobiographical. The play focuses on Simon’s alter-ego Lucas Brickman, who maintains a running commentary on the writing, fighting and wacky antics that take place in the writers’ room. And the writers’ room? Basically it was a room that was full of the best of the best. There are alter-egos portraying famous writers like Sheldon Keller, Sid Caesar, Carl Reiner and the beloved Mel Brooks. Neil Simon worked with them, and this play takes place inside the writers’ room … ready to laugh yet?

Simon understands comedy. After working with the list above, who wouldn’t? Through all of his cherished works, Simon shows his ability to write myriad jokes based on the human condition. For “Laughter on the 23rd Floor,” wit is an understatement. There isn’t a line in the show that doesn’t have a double meaning −  and it is usually comical.