This will be the first Woodstock appearance for the band, an Americana act featuring bluegrass instruments, pop-based melodies and toe tapping energy. Their latest release “Live in LA” was produced by Chuck Plotkin (Bruce Springsteen, Bob Dylan) and Hank Linderman (Eagles, America).

The band has toured extensively, from 43 U.S. states to Africa, where they were guests of the United States Embassy in Burkina Faso. In 2014, they were named band of the year at the Momentum Awards by the International Bluegrass Music Association. They have been called “one of the most promising bands on the bluegrass scene” by CMT Edge.

According to the Elm Street website, the Lantern Series is about “conversations and community at its core. This series will strive to introduce new music, ideas and cultures, that aren’t typical for the community.” 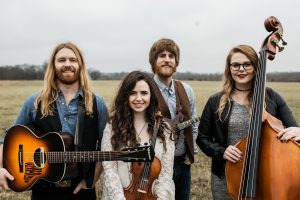